You'll have to please excuse me, I'm still in shock over my oldest son turning twenty-one years old. I mean, it's not like I didn't know it was going to happen, I just didn't expect it to happen so quickly. I kind of thought I could will it away with my super mom powers, but no such luck. I was very happy  for him to have a birthday, I would just prefer it be a number of my choosing and turning twenty- one wasn't the number I had in mind. I was thinking something more along the lines of twenty again. I know I should want him to be little again, and sometimes I do, but he has come a long way since then and let's face it, those were the terror years. I kind of like him being able to make his own sandwiches and having the ability to explain to me what the problem is without all the crying until I guess the appropriate response! It's much better this way, I just don't want him to be legally allowed to drink. Not that I think he's a big drinker, or going to be one; I just think this is the last line being crossed into official adulthood and I do not like it.

My youngest, my daughter, is very close to turning sixteen and, as all children tend to do, she assumes it will be all about her. She has been telling me about all of her plans for her sixteenth birthday and frankly, I just do not approve. She wants some sort of a cabin party. Meaning that she wants to rent a cabin and have all of those other little sixteen year old girls come over and spend the night and scream and yell, watch movies,talk about boys and blah blah blah. Let me first clarify that we do have a house. She even has her own bedroom. So the fact that I am being asked to pay good money to rent another house in the same town for them to sleep in seems a bit absurd to me. 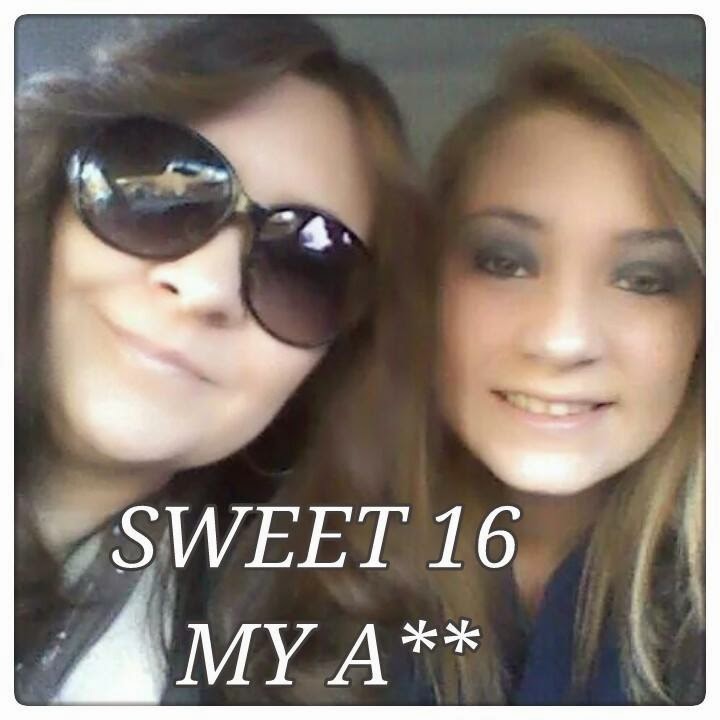 The other day while trying to nicely explain to my daughter that I would like to throw her a Sweet Sixteen party, it occurred to me for the first time that this is not all about her. This about me. Sure, we celebrate her every year on this date but I don't really think the score is even when I lay it all out in front of me. She informed me the other day that it's not my birthday and therefore not my decision. This is when the light bulb went off for me. I then asked her exactly what she did on this day sixteen years ago to deserve a party in her honor. She was a little taken aback at my question and speechless for the first time in the sixteen years since we've become acquainted with one another, so I answered for her. "Nothing. You did nothing. I did all of the work. You were absolutely no help to me at all as I tried to squeeze your little human body out of mine so that I could be one with myself again. The only thing you did was hang around in my womb reeking havoc and sucking me dry of nutrition while making me piss my pants every time I had to sneeze or cough. I think I should be the one celebrated  on this day."

No doubt thinking that my sanity had taken a complete leave of absence, she responded by telling me that is what I have Mother's Day for. She was not born on Mother's Day, and neither were either of my other two children. Which is not only stupid and the wrong date , but brings up another wonderful point. I have three children- so why on Earth do I only have one Mother's Day? Wouldn't it make much more sense if when each of their birthdays rolled around I got a cake for all of my hard work, not to mention my pain and suffering leading up to those days? I think I should definitely get some sort of monetary compensation for the time I spent growing another human inside of my body! Kind of like how people get paid to do experimental drug programs. Ya know? Just to see how she turned out. After all, she has cost an absolute fortune just to maintain and keep her alive over the years! I don't know about the rest of the mothers out there, but at the very least I think I should get double billing on the party invitation or the program for the big event. And just for the record. Nobody is sweet at sixteen.