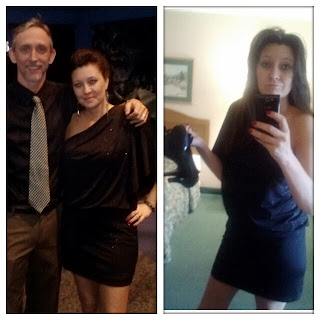 These are before and after photos of my Barrelassin' husband's employee Christmas party last night.
Well, technically, they are in between and after photos. Because before either of these looks, I had a
towel wrapped around me trying not to get my fake tan on my furniture as I added fake fingernails and fake eyelashes to the real me. This "before" look in the photo shown took up a lot of my day. The after...not so much. I'd love to know how you crazy kids take these mirror photos so effortlessly considering it took my five tries to get my face in the picture. But we'll save that for another day.

There's nothing like doing the walk of shame in last night's party dress. Even though my husband explained to me that it's not the walk of shame; we are a married couple. Well, tell that to the hotel maintenance men standing in the parking garage on their smoke break while I strut my stuff to my car; my eyelashes now in my evening clutch, mascara on all the wrong places of my face, wearing a pair of hooker heels at ten a.m.- I had the good sense to go out wearing my husband's long coat, rather than my short fancy fur, but upon walking by the hotel staff, I quickly realized I looked like I was about to take off streaking (as in: to rapidly flash) all the way to my car; due to the over-sized trench coat making it appear that it was possibly the only thing I was wearing.

My husband mentioned that it may be too late to get actual breakfast food; as if I was going out to breakfast with my new look. Honestly, I had been thinking about a cheeseburger since very late the night before when I raided the hotel vending machine settling for a bag of Cheeze-Its and a bag of plain Lays, so a drive-thru meal was perfect for me.

I keep using the word "hotel" when I should probably paint the picture a little clearer. I would say it was more along the lines of a "Motel" which, somehow makes my appearance leaving seem a little more likely that I was, in fact, a "lady of the night" that my husband had called up and paid at the end of a wild night. Can you imagine if that had actually been the case? How horrified would he have been when he woke up to see me with all my falseness on the nightstand and previously white sheets now perfectly, fake tanned? Oh well, it always starts out pretty doesn't it? (Shaking my head.)

Email ThisBlogThis!Share to TwitterShare to FacebookShare to Pinterest
Labels: #before and after photos, #Christmas parties, #lady of the night, #little black dress, #walk of shame