YOUR WIRES ARE DEFINITELY CROSSED... 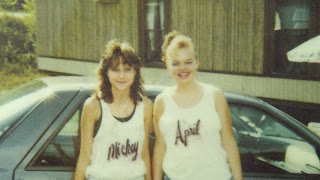 Once upon a time, in a land far, far away,(by "far away" I mean about about twenty two years ago, which would make me seventeen years old) my Barrelassin' cousin and I were mechanics (by "mechanics" I mean "no we were not.") We were definitely not mechanics, but that would've been cool. In fact, it would've been great considering the amount of time we spent under the hood of a car.

My Barrelassin' aunt left town with her husband for a very lengthy road trip, and her two daughters stayed behind with me and Momma. We had full use of their vehicle while they were away, a choice they probably weren't  too happy with upon their return home, but the damage was done- no turning back.

I can't tell you a big long story about what happened to this car in the first place, besides the fact that it turned into our traveling closet; we had clothes for every occasion covering the backseat of this car. We were never without what we needed to keep us rollin'. We barrelassed all over town in that car. Anyway- at some point the car needed repairs and our two dollars were not going to be enough to take care of the problems. Lucky for us we didn't need to do anything. There was the other daughter, and she had a boyfriend who knew a thing or two about cars and was more than willing to repair the car for us. Don't ask me what he did, I do not know the answer. I only know that whatever he did turned us into mech-ani-acs.

This is a play by play of what it took for us to leave the driveway in the car.

Lift the hood
Take two spliced wires and connect them to one another. At this point we would hear the fan.
Close the hood- start the car.

This was during daylight hours. When it would start to get dark, we would pull over somewhere and lift the hood and connect another set of spliced wires. This would make the headlights work. Now- the catch to the whole thing was that, the second set of wires- the ones that made the lights work, had to be connected in order for the radio to work. So if we wanted to listen to the radio we had to drive around in broad daylight with the lights on (way before daytime running lights where lights were always on) and every person we passed would flash their lights at us to let us know our "headlights were literally...on." The even bigger problem was that the lights only worked on bright. So, not only did people flash at us all day, now we were cruising town with everyone flashing their lights at us, because we were now bright-lighting them. Anytime we parked the car, we had to lift the hood, disconnect all the Frankenstein wires and go about our business. It was a vicious circle.

After a few encounters with guys approaching us to see if we needed help, we quickly learned to use this to our advantage. We were not dummies. Not most of the time anyway. When we saw the attention it brought every time we raised the hood of that car, it became a tool. A tool we used to meet guys we wanted to meet. We would cruise around town, wherever the cute guys were and wherever they were turning around or hanging out, is where we would drive the car to and lift the hood and try to look as confused as possible. "What in the world is wrong with our car? What could be going wrong here?" Worked like a charm- EVERY SINGLE TIME!

We were experts! We knew exactly what guys we wanted to help us and precisely where to park that car, and the precise moment to park it there to get their attention. The real problem was that none of them ever had a clue what was wrong or what to do. That was a good stall that gave us time for the perfect amount of conversation and time for plenty of hair-flipping moments. The best part was the moment we knew we no longer wanted to talk to some of the guys- we would instantly look like a genius, declaring, "I think I will put these two wires together, and then these two and see what happens" and the car would start, we'd say a quick "thanks for your concern" and speed off to "fake break down" in front of some other guys that we deemed a better choice. The downside...some guys spent the whole time actually mystified trying to figure out what was wrong with the car and left no time for small talk with us, and even if we wanted to talk to the chosen ones, there came a time where we had to become mechanics in a nonchalant way and fix the car ourselves, leaving a lot of guys scratching their heads and probably feeling like fools.

These memories are so funny to me, but when I think of them, I have to wonder...did we have a "bright idea" or did the two of us have a couple of "loose wires?"