FRIDAY THE 13TH IS RIGHT ON TRACK

Today I set my very own record! I walked the track in two minutes flat! I got all gussied up in my track clothes. You know, the clothes that help make you feel more amazing anytime you exercise? Anyway, I'm getting off track here(pun intended.)

Getting off track was exactly what I intended to do after only one minute and  half way around my first lap, when a man walked out of the woods with  a weed eater. I don't know if my heart actually stopped, but I know it was no longer beating at a healthy pace or rhythm once I saw him.

My daughter was sitting in our car chillin' when this all took place. I continued the last half stretch toward my car, all the while pretending to admire the trees on each side, my head darting from side to side as I secretly kept my eyes on how far behind me the weed eating murderer was walking. I reached the part of the track nearest our car with my very best "everything's all cool, you didn't just scare the shit out me" attitude just in time to pretend I needed to stop and ask my daughter a question before the killer closed in on me. I'm sure I was very inconspicuous, like a spy. I made it  just in time for the murderer to continue walking right past us. 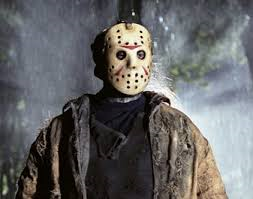 Maybe it's just me, but it seemed a little suspicious that he walked across the street and began his weed eating cover character over there. I asked my daughter what she thought I should do, she gave me her most puzzling look and told me that I should probably continue my walk. I started to, I tried as hard as I could, I even took a few steps, then I heard the weed eater slow down, almost to a complete stop. It was then that  I realized if I kept going, and I reached the far side of the track and that man came back across the street, I would surely die. Probably of a heart attack before he had time to kill me, but either way, I would be dead.

I decided to leave and finish my walk at home, where the streets are safe. This is how the conversation between me and my daughter went down next:
Daughter: "You only walked one lap."
Me: " Excuse me, a man came walking out of the woods at me!"
Daughter: "With a weed eater!"
Me: "Well, it may as well have been a chainsaw and a hockey mask. Take me home."
Posted by Unknown at 12:57 PM