Nobody in the music industry was more adorable than Cindy Lauper in the eighties! I was a grown woman before I was finally able to see her live. She was pregnant with her son and opening for Tina Turner. How amazeballs is that? Two super women performing at the same show! That reminds me, we got tickets for my Barrelassin mom's birthday. Several of us were attending the show. We lived about an hour away from the venue. The very moment that I was parking in the garage, my Aunt realized that she had left her ticket at home. So, her son, my cousin, gave her his ticket and literally Barrelassed back to the house and back (getting a speeding ticket on the way back) with the ticket. Fortunately, we had arrived early enough in the first place that the show had just started when he made it to his seat. Now here I am, learning that Cindy is kicking off a 2013 tour. I'm thinking this calls for a Girl's Just Wanna Have Fun Road Trip! Now I just need to get my Barrelassin girls on board and we'll be good to go. Maybe they'll read this and take the hint ;)
After all, Time After Time; Girls Just Wanna Have Fun any damn way! 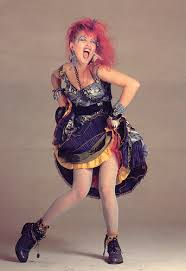