I loved Beverly Hills Cop when I was a kid! I loved Eddie Murphy in everything! Trading Places was hilarious to me, but his stand-up was the best. I wasn't nearly old enough to be watching Eddie Murphy's stand-up, but I did. I watched it every chance I got. I'm pretty certain that I was the only fifth grader wearing a Lawd Have Murphy shirt to school. My Barrelassin mom went and saw that show live, and I cried and was so upset that she wouldn't take me with her, but she did bring me a shirt. Thanks  mom ;) I can't imagine the humiliation she would've felt had she took an eleven year old child to see Eddie Murphy live, however, mom, I think that was my last shot. She suggested I see Whitney Houston instead of Motley Crue when given the choice, because she said Whitney may never come back to our town. She was right, we saw her, it was fantastic, and she never came back. I should've thought to use this logic with Eddie Murphy. I still haven't seen him :/
"I got some Ice-cream, and you don't have none." 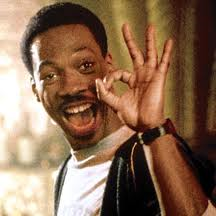 Goony Goo-Goo Barrelassers :)
Posted by Unknown at 6:57 AM